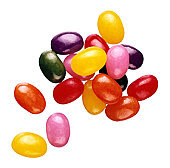 Jellybean Wars
The week before Easter, I wanted to come up with a game involving pretend jellybeans.  In the past we've played a throwing game called "Star Wars", so I thought we'd do something similar called "Jellybean Wars".  The kids loved it!  I played this with 2nd-5th graders and they all had a lot of fun!


Set-Up:
Divide class into 2 teams.  Each teams has to stay on their side of the gym.  The half court line divides the teams.  Place tons of foam balls around the playing area.  Place 2 garbage barrels on each side of the gym.  Place 3 (or more) smaller containers/buckets on each side of the playing area.  Make sure the barrels/buckets are placed in a variety of distances from the half court line so that players can throw balls far or close, depending on skill level.

Rules:
1) Players are to pick up balls (aka. jellybeans) and try to throw them into the buckets/containers (aka. Easter baskets).
2)  Players must not cross the half court line.
3)  Aim for buckets that are on the other team's side (don't throw jellybeans into the Easter baskets on your side of the gym).
4)  Player may not stand and block the Easter baskets.  Players may catch jellybeans or attempt to stop them from landing in the Easter baskets, but they may not stand and guard a basket.   (We had a 5 second rule....no standing for more than 5 seconds.)
5)  Players begin game on their team's end line.  When teacher starts music, they may begin playing.
6)  Optional - After a period of time (2-5 minutes), the teacher may stop the game to count how many jellybeans each team got in their Easter baskets.    Baskets placed farther from the half court line could be worth more points (because these are more challenging).

Penalty for Breaking a Rule - Player had to do 10 Bunny Hops on the sideline, OR you could tell them to do bunny hops for a period of time (watch the clock and when it changes they can come back into the game).